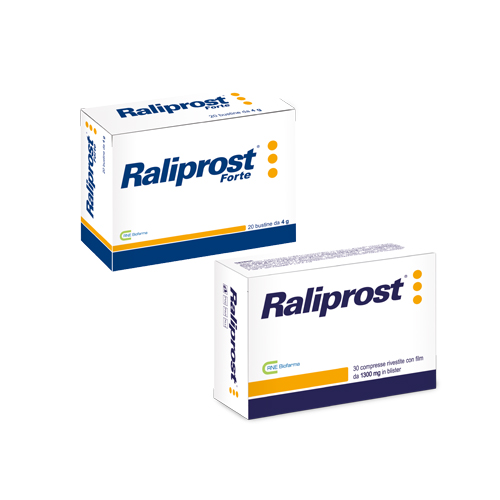 It is a product containing Green Tea (Camellia Sinensis, tit. 50% Catechins, 30% EGCG), Serenoa repens e.s. (tit. 40-45% FFA), Soy e.s. (tit. 40% Isoflavones), Zinc, Lycopene, Curcuma longa e.s. (tit. 95% curcuminoids), Vitamin E and Selenium (Only in Raliprost Forte) which can be useful to help in a natural way the physiological functions of male urinary tract, in particular of the prostate, and play a synergistic anti-inflammatory and antioxidant role for the prevention of cellular damage induced by oxidative stress.

Green Tea (Camellia Sinensis, tit. 50% Catechins, 30% EGCG)
Catechins are plant metabolites extracted from the leaves of Green Tea (Camellia sinensis) and belonging to the flavonoid family. They represent more than 80% of the polyphenols present in green tea and are mainly represented by:

although most of the biological effects are attributed to EGCG. In our body catechins exert an high antioxidant activity due to their structure characterized by a combination of aromatic rings and hydroxyl groups that allows it to neutralize free radicals and enhance and reactivate the other antioxidant systems. Epidemiological observational studies show that the intake of catechins is associated with a lower incidence of cardiovascular disease, with a decrease in total cholesterol levels, an improvement of blood circulation and blood pressure. Catechins also exert a photoprotective effect by reducing the damage induced by UV rays, and are able to promote the production of the hepatic detoxification enzymes thus reducing the production of oxygen free radicals. The epidemiological observations also indicate that individuals who regularly consume green tea are subject to a lower risk of death due to prostate cancer. In fact Chinese population that regularly consume this drink, has a lower incidence in the world of prostate cancer (5%).
Several studies in cell culture systems and animal models have demonstrated the utility of catechins in reducing the risk of prostate cancer, as they inhibit the growth of prostate cancer cell lines by inducing apoptosis of these cells.

Serenoa repens e.s.(tit. 40-45% FFA)
It is a small palm tree with wide leaves with dark red berries native to the southern United States. The extract from its fruit contains fatty acids (lauric, myristic, caprylic, palmitic, stearic, oleic, linoleic, linolenic acids), methyl and ethyl esters of fatty acids (beta- sitosterol, stigmasterol, campesterol, etc.), saturated and unsaturated long chain alcohols, carotenoids , flavonoids (rutin, iso-quercitin) and polysaccharides.
It has been demonstrated that the intake of Serenoa repens is useful in prostate disorders, especially as adjuvant in the treatment of prostatitis and benign prostatic hypertrophy (BPH) to counteract the disorders associated with it as it helps to stabilize the low and altered urinary flow typical of this disease. The efficacy of the extracts of Serenoa repens is due to all of different mechanisms of action:

Soy e.s. (tit. 40% Isoflavones)
They are heterocyclic phenols of vegetable origin with estrogenic-like hormonal properties. Ubiquitous in the vegetable world, high concentrations are mainly found in soy (soy isoflavones). Soy isoflavones are phytoestrogens with high estrogenic activity and are mainly represented by daidzein and genistein. Several studies have shown that soy isoflavones exert an estrogenic, anti-estrogenic, antioxidant and immune-stimulating action, and stimulate fibroblasts to produce collagen and hyaluronic acid, thus preventing skin aging. For these several actions phytoestrogens are used in many fields, especially for cardiovascular disease, high cholesterol, premenstrual syndrome, menopause, osteoporosis, malignancies and to enhance the effects of skin aging. Several epidemiological evidence also suggests their use in the prevention of prostate cancer. In fact the Japanese population with a diet low in fat and rich in soy, has very high plasma concentrations of isoflavones and is subject to a lower incidence of prostate cancer and consequently to a lower mortality from this disease. The suggested mechanism of action involves the adhesion of genistein to prostate cancer cells, inhibiting the growth of these cells, and finally inducing their apoptosis. Isoflavones may also exert a potent inhibitory activity of the enzyme 5-alpha reductase, which is involved in the mechanisms of proliferation of prostate cells that are the basis of the development of prostate cancer.

Zinc
Zinc is an essential element in the life of human beings. It is present in trace amounts in our bodies (from 1,5 to 2,5 g) and its daily requirement is between 7 and 10 mg. Zinc is involved in the beta chain of hemoglobin, is implicated in the development of the gonads, in nerve functions and memory. It is part of insulin, of protein with a zinc-finger structure and acts as a cofactor for the function of several enzymes, such as dehydrogenases, involved in the metabolism of nucleic acids, proteins, carbohydrates and lipids, and also those with an antioxidant action such as superoxide dismutase (SOD). Its lack considerably affects body growth. It is found mainly in foods such as meat, nuts, egg yolk, mushrooms, cocoa although its intestinal absorption does not exceed 30%.
Zinc is especially active in the mechanisms of protection from damage induced by free radicals. The interest for its use in the prevention of prostate cancer is attributable to some studies in which it was detected a marked reduction of this element in the cells of prostate cancer tissues compared to normal prostate cells. In healthy prostate tissue zinc acts as inhibitor of the enzyme m-aconitase which takes part in the Krebs cycle. Lacking the inhibition caused by low levels of zinc, the malignant cells are able to freely complete the Krebs cycle converting from epithelial cells to cells with low efficiency in energy efficient cells.

Lycopen
Lycopene is an acyclic non-polar compound, belonging to the carotenoid family and characterized by an open chain of 40 carbon atoms with 11 conjugated double bonds but, unlike the beta-carotene, is devoid of provitamin A activity, ie it is not transformed in the body into vitamin A, but can be converted to beta-carotene by the action of beta-cyclase. It is present in high amounts in ripe tomato (Solanum lycopersicum – fam. Solanaceae) and is also responsible for the red and yellow color characteristic of other fruits and vegetables. The lycopene content is influenced by the level of maturation of the tomato: in facts was calculated that in red and ripe tomatoes there are about 50 mg/kg of lycopene, whereas the concentration falls to 5 mg/kg in the yellow varieties.
Lycopene can not be synthesized by the body, so its presence depends on the diet. We recommend an intake of 50-100 mg per day in order to benefit from its effects. Being a lipophilic substance, its absorption is related to the presence of fat in the diet, and once absorbed is distributed into tissues in correlation with the presence of lipids: in fact it is more abundant in adipose tissue, testes and seminal fluid, adrenals, liver, prostate and breast.
Because of its acrylic structure, of its high hydrophobicity, the number of conjugated double bonds and the presence of two additional double bonds compared to other carotenoids, lycopene appears to be a very interesting substance relatively to its various therapeutic applications. It has in fact a very high antioxidant activity, protecting cells from aging and degenerative damage produced by free radicals, in an extremely more effective way than the common carotenoids. Lycopene also shows a very effective antioxidant and reparative capacity, in particular in the degeneration of the prostate, uterus and gastrointestinal tract. Epidemiological observational studies have indeed shown that an abundant consumption of tomatoes and its derivatives or high concentrations of circulating lycopene are associated with a reduction in the risk of degenerative diseases of the digestive tract (esophagus, stomach, colon, rectum and pancreas) and prostate.

Curcuma longa e.s. (tit. 95% curcuminoids)
Curcuma is a genus of plants belonging to the family of Zingiberaceae, including several species among which C. longa, C. aromatic and C. xanthorrhiza, used since ancient times both as spices (eg, ginger and curry) and as medicinal herbs in traditional Chinese and Indian medicine for the treatment of indigestion, intestinal disorders, hepatitis, diabetes, atherosclerosis and bacterial infections. The main bioactive compounds present in these plant species are curcuminoids, represented mainly by curcumin, which shows the major biological effects, without side effects of particular importance. Numerous studies have highlighted the significant anti-inflammatory, antioxidant, anticoagulant, antihypertensive, antidiabetogene, antiviral, hepatoprotective and chemopreventive characteristics of curcumin. The antiinflammatory activity is mediated by its capacity to inhibit enzymes involved in the process of inflammation (eg, cyclooxygenase-2 , lipoxygenase) resulting in a down-regulation of the expression of various differently inflammatory cytokines (TNF- α, IL-1, IL-2, IL-6, IL-8, IL-12), which are often closely related to the promotion of inflammatory and degenerative disease. The antioxidant activity of curcumi, which is expressed through scavenging of oxygen free radicals, seems to be much higher ( about 300 times) than that exerted by vitamin E. The curcuminoids is therefore a valuable aid in the prevention of damage caused by excessive oxidative stress in the epithelial cells of the uro-genital tract.

Vitamin E
It is a fat-soluble vitamin essential for humans, present in fats and animal and vegetable oils. It plays an important antioxidant role in the prevention of the process of lipid peroxidation and oxidation of cellular constituents, caused by the action of free radicals. In synergy with Vitamin C also protects skin from damage induced by UV rays. In addition, a study called ATBC (Alpha-Tocopherol, Beta-Carotene Cancer Prevention) showed that the daily intake of Vitamin E reduces by 32% the risk of developing prostate cancer.

Selenium – Only in Raliprost Forte –
Selenium is an important element involved in the protection of cells thanks to its ability to counteract the damage induced by free radicals. It acts mainly in association with the antioxidant enzyme glutathione peroxidase, which in turn works together with vitamin E in preventing the damage caused by free radicals to cell membranes.