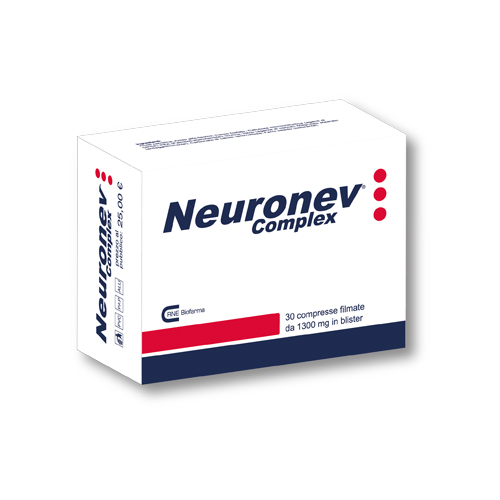 It is a product containing Palmitoiletanolamide (PEA), Alpha Lipoic Acid, Acetyl L-carnitine, whose association promotes a strong antioxidant, neurotrophic and protective, encouraging the tropism of the Nervous System.

Palmitoylethanolamide is a palmitic acid amide, a fatty acid, with a hydroxyethyl group in position 2. It is an endocannabinoid produced naturally in the body in response to neuronal stimuli starting from N-acetylphosphatidilletanolamide (NAPE). It is present in numerous foods (milk, dairy products, soy, peanuts, egg yolk) and takes its name from the fact that it is found in palm oil. PEA binds to specific nuclear receptors (PPARα) and performs a wide range of biological functions related to chronic pain and inflammation, performing a natural analgesic and anti-inflammatory activity. The anti-inflammatory action, both in the acute and in the chronic state, is expressed not only by a mechanism similar to NSAIDs, but mainly through the inhibition of the release of inflammatory molecules from mast cells, monocytes and macrophages. The micronized PEA guarantees an absorption higher than the pure equivalent.

Alpha lipoic acid (or thioctic acid) is a very smaand ll fat soluble vitamin consists of eight carbon and two sulfur atoms, which exists in nature in two forms, as cyclic disulfide (oxidized form) or dihydrolipoic acid with open chain containing two sulfhydryl groups in position 6 and 8, easily interconvertible via redox reactions. Alpha lipoic acid is an essential cofactor for the activity of numerous enzymes, in particular for the dehydrogenase in the human organism. Alpha lipoic acid is synthesized independently by the organism but with ageand with the development of certain neuropathies, its production drastically decreases. Its main features are:

Thanks to these characteristics, alpha lipoic acid is extremely essential for organism to counteract the damages associated with the formation of free radicals, and when its intake is associated with that of group B complex vitamins, it represents a significant help in disorders associated with environmental, iatrogenic, food or consequential pathologies oxidations.

It is the tri-methylated ester of L-carnitine that is formed in the mitochondria of liver, kidney, and brain cells, through a reversible acetylation reaction of carnitine catalyzed by the enzyme acetyl-carnitine transferase. Acetyl-L-carnitine is able to easily cross the mitochondrial membrane, and regenerate for oxidative purposes L-carnitine through the transfer of acetyl group, thus enhancing lipid metabolism. Then acetyl carnitine plays an essential role to have a correct energy cellular metabolism and of trasmission in the Central Nervous System. It represents a form of storage of acetyl groups that may be associated with the Coenzyme A, necessary to trigger the Krebs cycle, thus also intervening in carbohydrate metabolism.
In pathological conditions the Acetyl carnitine is a valid protection factor for the cells of Central Nervous and Peripheral System, for its organelles, especially the mitochondrion, but it is also an excellent trophic element with a neuro-reparative action to restore the integrity of cells.
In fact promotes: the post-lesional recovery through a better cellular use of NGF (Neuronal Growth Factor); an increase of ATP production without which could not take place repair mechanisms; an increase of the neo-synthesis of phospholipids for the construction of membranes.