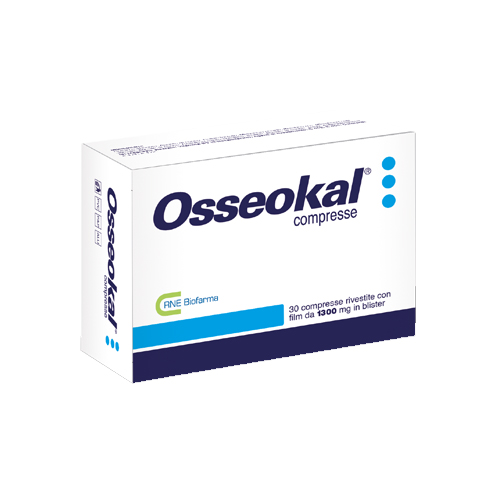 It is a product containing Vitamina D3, Calcium, Phosphorus, Silicon and Magnesium which can be useful for promoting the physiological metabolism of bone tissue.

The two main forms in which the Vitamin D can be found, both with a very similar biological activity are Vitamin D2 (ergocalciferol), which is formed when the UV rays hit its provitamin form of vegetable origin (ergosterol), and Vitamin D3 (cholecalciferol), which is produced in animal organisms by irradiation of 7-dehydrocholesterol. Vitamin D3 or cholecalciferol then undergoes in various tissues a first hydroxylation reaction with the formation of 25-hydroxycholecalciferol 25(OH) D3 which passes into the general circulation and binds to a specific carrier protein (Vitamin D binding protein, or DBP). Then in the kidney, 25(OH)D3 can undergo two different hydroxylation reactions, catalyzed by different hydroxylase (1- and 24- hydroxylase), which give rise respectively to 1,25-dihydroxycholecalciferol [1,25 (OH )2D3] (or calcitriol), the active component; 24,25-dihydroxycholecalciferol [24,25(OH )2D3], an inactive form.
The metabolically active form of vitamin D (or calcitriol) is essential for the maintenance of homeostasis of calcium and phosphorus. In fact, it promotes intestinal absorption of calcium and phosphorus, promotes the absorption of calcium in kidney, and the bone mineralization i.e. the deposition of calcium in the bone tissue. The 1,25-(OH)2-cholecalciferol has a similar structure to steroid hormones, so it acts with a hormone-like mechanism of action: in the cell binds to nuclear receptors that stimulate the production of many proteins, especially those that transport calcium .
The regulation of calcium and phosphorus levels in the body takes place together with the action of two important hormones: calcitonin and parathyroid hormone. Calcitonin has opposite actions to those of vitamin D: it promotes the urinary excretion and the calcium deposition in bones, resulting in a decrease in plasma levels of calcium. The parathyroid hormone, however, inhibits the renal reabsorption of phosphates, increases that of calcium and stimulates the kidney to produce 1,25 (OH)2D3. In bone it promotes the release of calcium. The production of these hormones and vitamin D is closely dependent from plasma calcium concentration: the hypocalcemia stimulates the production of parathyroid hormone and 24,25 (OH)2D3. An increase in plasma calcium, however, promotes the synthesis of calcitonin. This delicate balance results in a good regulation of the mineralization processes.
It also seems that vitamin D can promote the differentiation of epidermal keratinocytes and osteoclast and, perhaps, also holds an antiproliferative action.
In the Vitamin D deficiency early changes consist of a decrease in serum calcium and phosphorus resulting in secondary hyperparathyroidism and increased concentration of alkaline phosphatase. Then you have abnormal mineralization processes with rickets in children and osteomalacia in adults with consequent fragility and fractures, muscle weakness, bone deformity and pains. A vitamin D deficiency is a very frequent phenomenon in adulthood, it is due to a lack of exposure to sunlight, to a decreased ability of the skin to produce vitamin D with age, both to poor diets.

Calcium is the most abundant mineral in the human body, where it is found almost exclusively (99%) in the skeleton. Calcium is a critical element for the human body. In bone it plays a structural role, as a component of the hydroxyapatite crystals and constitutes a reserve for the maintenance of its plasma concentration, thanks to the action of calcium homeostatic-regulators hormones (calcitonin, parathyroid hormone, calcitriol). It is necessary for a proper function of numerous intracellular and extracellular processes such as muscle contraction, nerve impulse conduction, hormonal release and blood coagulation. Furthermore, the calcium ion plays a unique role in the mechanisms of intracellular signaling, it is important for cell permeability, and intervenes in the cell multiplication and differentiation and it is involved in the regulation of numerous enzymes. Calcium metabolism is regulated with a very complex dynamic by vitamin D and by two hormones, parathyroid hormone ( PTH) and calcitonin.

Vitamin D promotes the absorption of calcium; PTH increases the concentration of calcium in the blood (serum calcium) when its values ​​are lowered (hypocalcemia):

Calcitonin has an opposite (lowing serum calcium) promoting the deposition of calcium in bone tissue and reducing the reabsorption in the kidney.
Normally we inevitably lose a certain amount of calcium through urine, feces, sweat, flaking skin and skin appendages (nails, hair) thus these losses should be replaced with an appropriate food intake. There are also some factors and physiological conditions that can increase the requirements and/or the daily losses of calcium. If these losses are not balanced by equal amount of dietary calcium, the body then implements a series of countermeasures, regulated by specific hormones, in order to remove calcium from bone storages and make it available to all other cells. If the deficiency is prolonged in time, the body is no longer able to repair the metabolic damage of bone tissue and it occurs a significant reduction in mass and bone mineralization creating the conditions for the onset of osteoporosis as well. Calcium deficiency also causes impaired growth up to rickets, bone demineralization and hyperexcitability with occurrence of seizures. It is clear therefore that an increase of the dietary intake, possibly also guaranteed by an integration is important to ensure a proper and more rapid process of recalcification after bone fractures and also as a preventive mechanism to reduce the risk of fractures.

It is the structural component of teeth, bones and cells and represents more than 1% of body weight. The 85% of phosphorus present in the body is in bones together with calcium in the form of calcium phosphate and hydroxyapatite, while the remaining 15% is located in the soft tissues, in extracellular fluids, in the cells coating, in a structural role (as constitutes of phospholipids). It also has a functional role: the phosphate groups are in fact part of DNA, RNA molecules and ATP. Therefore it is a component of the genetic material and intervenes in the intermediate metabolism in a series of compounds used for energy storage and transport (ATP) and in the intracellular transmission of messages. It is involved in the the nerve impulses transmission and stimulates muscle contractions. Phosphorus homeostasis is maintained by changes in renal excretion of phosphates, of which the parathyroid hormone is the main regulator. About 60% of the phosphorus present in food especially from protein source, is absorbed in the intestine under the favorable influence of vitamin D, independently of its effect on calcium absorption. However we have to avoid too high levels intake of phosphorus compared to those of calcium since the absorption and excretion of phosphorus are closely linked to those of calcium.

The dry extract of stems and leaves of Bamboo contains high amounts of bioavailable silicon in organic form and therefore easily assimilated. Silicon in our bodies is micro-nutrient present in the connective tissues, bones, as a constituent of the keratin of hair and nails. Silicon plays a structural role in the mineralization of bone tissue, in the synthesis of collagen and connective tissue. Its lack may result in a reduction of body growth and developmental delay, a weakening and loss of elasticity of the cartilage. The presence of an adequate amount of silicon in the body ensures a normal and physiological synthesis of cartilage and bone tissue. The dietary integration of silicon may therefore constitute a preventive and curative treatment mainly in the alterations of bone mass, and as a complementary treatment to facilitate the proper formation of callus after fractures.

Magnesium is an essential component of the human organism. In the adult content of magnesium is approximately 20-28 g of which 60% is contained in bones, 39% in intracellular compartments and about 1% in the extracellular fluid. In the reactive form as Magnesium ion (Mg++) is able to bind to certain enzymes of energy metabolism, and function by enzymatic cofactor. In fact, humans Magnesium is involved in the synthesis and utilization of ATP, and is essential for many metabolic processes (glycolysis, gluconeogenesis, synthesis and duplication of nucleic acids, biosynthesis of lipids and proteins) in the transmission of nerve and muscle impulses and in the cell stability. A lack in the body can lead to an altered metabolism of calcium, sodium and potassium which results in weakness, muscle spasms, impaired cardiac function, tetanic crisis, loss of coordination, etc.